How others say goodbye around the world

When we say goodbye to our loved ones in Scotland it mostly involves speeches, poems and songs before cremation or burial, followed by a wake that can be tearful, rowdy or both. Perhaps the family will collect the ashes and place them lovingly on the mantelpiece, but most lay their departed to rest in a cemetery. That’s normal to us, but it would seem very odd, maybe even disrespectful, to some other cultures thousands of miles away in Asia or South America. While we might look on with horror at their rituals – disinterring the dead? Leaving them to the vultures? Hanging them from a cliff face?  – they would consider what we do strange indeed.

Famadihana
In Madagascar, a practice called Famadihana has evolved which would horrify most Scots, and would probably be illegal here. It translates as the turning of the bones. Every seven years families that still participate in the rite disinter their loved ones, rewrap them in silk shrouds and write their names on the cloth so they are remembered. It is illegal to ‘turn the bones’ of someone who has died of the plague, fortunately.

Sky burials
An even more gruesome ritual to western sensibilities might be the sky burials of India. The Parsi, followers of the prophet Zoroaster, believe that contaminating the elements of earth, air, fire or water with decaying matter is a sacrilege. So instead of burying or cremating their dead, the Parsi lovingly lay them out on top of a dokhma (tower of silence) to be exposed to the sun and eaten by vultures. In Mumbai alone there are 57 acres of forest garden dedicated to these towers.

Hanging coffins
Further east, multiple tribes in Indonesia, China and the Philippines began interring their deceased centuries ago in hanging coffins or tombs high off the ground up cliffs to protect them. In Sagada, a mountain province of the Philippines, it can still happen if the departed is of high social status or honour. They are placed in a coffin, which the deceased may well have carved themselves, in a foetal position –the same as when they entered the world – and then suspended from a cliff at a height that reflects their status.

Keeping a vigil
But this is not the only rite we would find unfamiliar in the Philippines. Many other regional customs, developed by various tribal people, are still followed. Some tribes will dress the deceased in their good clothes and place them in a chair for a long as eight days, next to or looking out of the front door so passers-by can show respect. One tribe actually places a lit cigarette between the lips of the dearly departed.

Sitting Shiva
The Jewish tradition of Shiva is also a vigil. On hearing of the death of a very close relative, a Jewish mourner may tear their clothing, a ritual known as keriah, while reciting a blessing to God. After burial 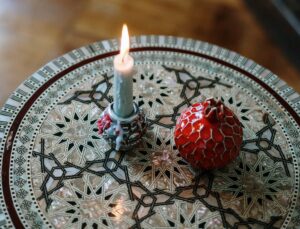 and lamentation, the torn garments are worn as the family sits Shiva (in mourning), which traditionally goes on for seven days. All mirrors are covered and the immediate family sit on Shiva benches while mourners bring food to comfort them and to share stories about the deceased.

El Día de los Muertos
There are lots of other rituals we could look at but let’s end with probably the most instantly recognised one. In Central and South America, death is not mourned but celebrated. Dating back to long before the Spanish arrived in 1492, Aztecs, Toltecs, and Mayans considered death and the dead as a natural part of life, to be honoured and celebrated. From this comes El Día de los Muertos or the Day of the Dead, most commonly associated with Mexico. It actually lasts three days, from 31 Oct to 2 Nov, when cemeteries are packed with families visiting their dead relatives, cleaning and painting the gravestones and weeding the plot. Fresh flowers, lit candles and calaveras or alfeñiques­ – decorated sugar skulls that represent the deceased – are placed on the graves. It ensures no one is ever really forgotten, even if it does risk rotting their ghostly teeth.